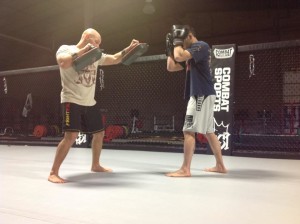 Rob was introduced to martial arts at the young age of 5. He began with Kenpo Karate and eventually started shootfighting and boxing as a teenager. After taking a few years off, completing College and starting up his career, he realized that there was a void missing in his life.

In addition to the physical benefits of training, he knew that his life was lacking the discipline and character building that martial arts once brought to his life. Almost 6 years ago he started training heavily in Muay Thai, Krav Maga and even advance counter terrorism training (CT 707). He is a pure example of how someone can use the discipline and skills that martial arts bring on the mat and apply them to your everyday personal and professional life.

In 2012, Rob received his black belt in mixed martial under 5th degree black belt, Master Garcia. Over the course of the last 6 years, he has had the honor to train with many of the area’s most well-known UFC fighters, the top Muay Thai trainers in the country and worldwide, and some of the worlds most honored and prestige military personal. He has a passion for learning and is constantly challenging himself with new training and new forms of martial arts. One year ago, he decided to dedicate himself to learning Brazilian Jiu Jitsu and started competing under Team Xcel’s competition team in January of 2013. Rob aims to be a leader in the gym and the community, sharing his love and passion of martial arts and the positive attributes that come with the lifestyle.